Shares of the large U.S. crypto exchange Coinbase (NASDAQ: COIN) took a hit this morning after Binance.US announced plans to eliminate fees on spot Bitcoin (CRYPTO: BTC) trades for users that make those trades with the U.S. dollar, Tether, USD COIN, and Binance USD. The move comes as the crypto market is floundering and the price of Bitcoin this past weekend plunged below $18,000. It’s another big threat to Coinbase, whose stock has fallen more than 78% this year due to lower crypto trading volume and lower crypto prices. Does the news spell doom for the stock? Let’s take a look.

Trading fees are important for Coinbase

Trading fees make up the bulk of Coinbase’s revenue. For instance, in the first quarter of 2022, as trading volume on the platform fell to its lowest level in five quarters, so did net revenue. The big concern is that even with the decline in revenue in Q1, transaction revenue still made up roughly 87% of total revenue. 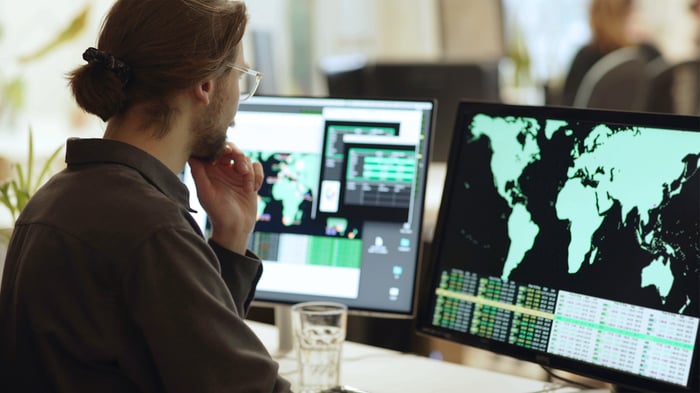 So, if Coinbase has to trim trading fees to keep up with the competition, it will no doubt be in trouble, given the company’s current business model. This is the main argument from legendary investor Jim Chanos, whose fund is shorting the stock.

“Coinbase was not a call on crypto prices,” Chanos said on a podcast a few weeks ago. “It was a call on what we thought was a sort of ancillary predatory business model.”

Chanos, who is famous for short bets on former companies like Enron, predicts that the 1.5% fee Coinbase charges on trades will fall as low as 0.50%. It’s already declined from 4%, Chanos noted.

When asked about trading fees on the company’s earnings call on May 11, Coinbase’s CFO Alesia Haas said that trading fees have held steady and that the blended fee rate had actually increased during the previous two quarters.

But Binance.US is not the only exchange bringing competition on fees. The one-stop financial services platform SoFi also announced that it will enable users to invest a portion of every direct deposit into cryptocurrencies with no fees attached.

While I wouldn’t say this is a good development for Coinbase and could present some tough times ahead, I would not go as far as to say the company is doomed.

For one, Coinbase has long known it needs to diversify its revenue and has been working to do so. The company pointed out on its recent earnings call that more than half of its active users now use Coinbase for activities other than trading, including crypto farming, spending crypto with businesses, and using it on decentralized applications.

Furthermore, Coinbase is seeking to diversify revenue with subscription services. Coinbase One, the company’s subscription service, enables users to conduct commission-free crypto trading for as many as 10,000 transactions per month. While it’s still not a huge part of revenue, subscription and services revenue at Coinbase in Q1 grew roughly 170% year over year.

I do think the added competition could put pressure on trading fees and therefore pressure on the company, but Coinbase has survived crypto winters before and still has one of the most established brands in the industry. If you think cryptocurrencies will be around 10 years from now, and that more people will be trading them than now, it’s hard to imagine a world where Coinbase isn’t a prominent brokerage in the space.