This article is excerpted from Tom Yeung’s Profit & Protection newsletter. To make sure you don’t miss any of Tom’s picks, subscribe to his mailing list here.

Comparisons between rollercoaster rides and cryptocurrencies have always bothered me.

That’s because rollercoasters are fun when they go down.

The screams you hear at theme parks? That’s the sound of fantastic terror meeting pure joy  — and in my case, the sound of regretting that second corn dog at lunch.

Meanwhile, markets met Bitcoin’s (BTC-USD) ride to $17,663 over the weekend with eerie silence. No talking heads on CNBC telling me to “buy the dip.” Or popup ads from Robinhood urging us to “give the gift of crypto” for Father’s Day.

Instead, it felt more like a funeral. And every crypto holder was invited.

Some might feel tempted to “buy the dip” or continue using Bitcoin as a store of value.

I’ve long written about how BTC and other cryptocurrencies have a strong positive correlation with stocks — the opposite of what you want in safe-haven assets.

Instead, those looking for a cash parking spot should consider the sector I will talk about today.

Last month, I gave my starkest warning yet when I told investors to get out of crypto now!

Bitcoin had just fallen below $30,000, and my Momentum Master strategy was giving an unequivocal “sell” signal. No matter the long-term potential of blockchain technologies, it was time to get out.

Since then, the world’s largest cryptocurrency has lost another third of its value, highlighting the old Wall Street truism that a stock that’s down 90% must have first lost 80%…

But one defensive sector is in a far better position to shine:

Telecom vs. Other Safe Havens

Telecom companies in today’s inflationary market offer some of the best downside protection — without sacrificing upside potential. Analysts expect No. 3 player T-Mobile (NASDAQ:TMUS) to double profits in the back half of 2022.

It’s a unique combination that works well for Fed-driven recessions.

But recessions like today’s are driven by rate hikes. Rising rates reduce the value of fixed coupon payments, making bonds worth less. The SPLB bond ETF has already lost 22% of its value this year.

Low-Volatility Stocks. Then there are utilities and consumer staples, so-called “recession-proof” stock market sectors. These sectors are often considered lower-risk for their predictable cash flows and low volatility.

Today, however, these sectors trade at 20% premiums to the overall stock market. The last time consumer staples traded so highly was in 2016, a year where energy and basic materials stocks dragged down the rest of the market. And utilities have never traded at a more significant premium.

As America finds itself increasingly stuck between a rock (inflation) and a hard place (recession), telecom’s combination of steady cash flows and 5G growth will become one of the few remaining areas that could benefit from stagflation. 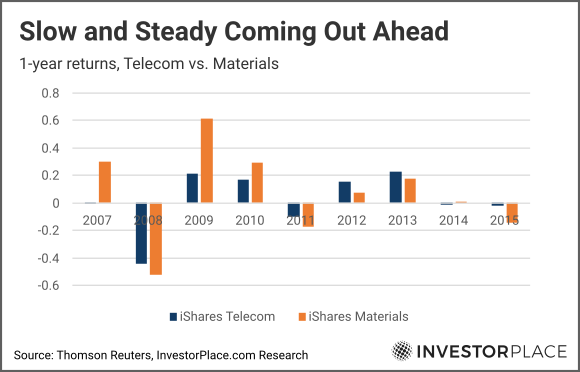 Telecom outperformed riskier materials stocks in the past economic cycle by 6.5%.

Between 2013 and 2020, consumer spending on cellular phone service rose 60% faster than spending in other categories, according to data from the BLS.

Much of the growth has to do with 5G adoption. 84% of households now own a smartphone, according to data from the U.S. Census Bureau. Desktop and laptop use has actually fallen over the past decade as users go mobile-only.

Consolidation is another driving force. As I’ve previously outlined, T-Mobile’s acquisition of Sprint reduced the number of U.S. players from four to three — a “magic number” in the telecom world. Three-way markets like China and Japan are noticeably less competitive than four- or five-way ones, like those found in the U.K. and Germany.

But today, I’m revisiting “Ma Bell” as a store of value for a different reason:

It’s easy to see why AT&T trades at a significant discount to peers — shares have traded sideways for the past twenty years.

Much of the pain has been self-inflicted. AT&T’s focus on margins meant that T-Mobile and other rivals quickly poached customers away. And the legacy firm’s reliance on pricey acquisitions from DirecTV to Time Warner hurt its ability to invest as heavily in infrastructure.

But AT&T CEO John Stankey’s about-face could become a turning point. Since taking the top job in 2020, Mr. Stankey has freed up over $120 billion of invested capital by floating DirecTV and WarnerMedia (Ironically, he was the one who engineered the DirecTV acquisition in 2015).

Management’s focus on cash flow (rather than profit margins) has also put the telecom firm on a more sustainable financial path. Gone are the oversized dividend payments; analysts now expect AT&T’s free cash flow to recover to $2.44 per share next year, a 23% increase from FY 2022.

Profit & Protection readers will immediately recognize this as a classic turnaround play. Companies with negative past growth followed by positive expectations tend to outperform as investors price in a recovery. The extra cash will also help AT&T catch up with its fiber network and better compete with Verizon and T-Mobile.

The firm’s improved cash outlook coincides with a market-wide pivot towards safety. Speculative investments like Bitcoin quickly fall out of favor as investors price in a potential recession. Bloomberg’s quantitative models now suggest a 72% probability of recession — much closer to my estimates of an economic downturn than the 25% to 30% chance that many investment banks were touting as recently as last month.

But in today’s market, it’s far better to park your cash in a 25% to 50% potential gainer than to lose it in the broader market.

How Long Will a Recession Last?

Some can linger for a while longer: the 1999 tech bubble ended with a 31-month decline in stock prices. Others are shorter; the peak-to-trough of the Covid-19 recession of 2020 lasted only one month, thanks to massive government stimulus.

But if averages are to be trusted, our current bear market could last until the end of the year.

It’s a reasonable guideline. Studies have long shown that stocks historically don’t bottom out until the Fed starts easing. That isn’t in the cards until at least the first part of 2023. And stock valuations still remain 15% higher than long-term averages.

The turning point will eventually come. Cryptocurrencies and other risky assets will quickly roar back once easy money returns.

But investors need to resist the temptation to jump back in too quickly. Momentum Master still has BTC solidly on its sell list. And given the somber mood of talking heads and crypto investors, it’s probably better to wait for the rollercoaster-like screams of joy before jumping back into the crypto waiting line.

P.S. Do you want to hear more about cryptocurrencies? Penny stocks? Options? Leave me a note at feedback@investorplace.com or connect with me on LinkedIn and let me know what you’d like to see.

On the date of publication, Tom Yeung did not have (either directly or indirectly) any positions in the securities mentioned in this article.

Tom Yeung, CFA, is a registered investment advisor on a mission to bring simplicity to the world of investing.