Backstage at London’s Wembley Arena, Dr. Ruja Ignatova was nervously pacing up and down, dressed, as usual, in a full-length ball gown. I will double your coins, I will double your coins. She could hear the whoops and cheers of thousands of adoring fans in the background. Ruja wasn’t usually nervous before events, but today she was announcing something that went against every rule of  financial investment—even the idea of money itself. If she couldn’t convince the crowd, who’d already invested a fortune in her promise of a global “financial revolution,” the whole thing would be over. Up to a billion dollars were at stake. 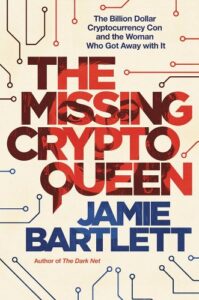 Her second-in-command, Sebastian Greenwood, was onstage warming them up. “I’m proud to be here today!” he shouted. “All of you are extraordinary!” The pair had founded the company just two years earlier. And, of the two, Sebastian had always been the better salesperson. But 3,000 people hadn’t travelled from 70 countries to see him. They’d come for her: the genius behind the most exciting new cryptocurrency in the world.

Sebastian introduced Ruja in his typically over-the-top manner: “The reason we are all here . . . please give a warm welcome to our creator, our founder . . .”

“This Girl is on Fire” by Alicia Keys blasted over Wembley Arena’s sound system and pyrotechnics lit up the stage. Every small detail, right down to the wording on the invitations, had been carefully planned. Ruja knew that appearance was everything, that people will believe anything if you look the part. She strode out confidently, her long black hair, the deep-red lipstick, the embellished red gown glittering under the spotlights, the diamond earrings—everything exhibited success and glamour. Behind her a giant logo was engulfed in flames: “OneCoin.”

The investors in the audience—the well-dressed Ugandan businessman, the devout Muslim from east London, the Scandinavian door-to-door vitamin seller—could recite Ruja’s backstory already. It was the reason most of them entrusted her with their money. Star student at Oxford University. A glittering spell in international finance with a top- end consulting  firm. Only 36 years old but already two-time Bulgarian Businesswoman of the Year and Forbes cover star. Fluent in Bulgarian, German, English, French and Russian. Some of the crowd whispered that she had an IQ of 200+. Others wore badges with her face on them.

It was only two and a half years since she’d had the idea that had changed everyone’s life. When Ruja first heard about something called “Bitcoin” in 2011, she was skeptical. She was from the world of finance and traditional banking, where things were done a certain way; money was backed by governments and run by central banks, as sure as night follows day. But the more she looked into this strange new virtual money, which operated online and outside banks or governments, the more fascinated she became. The inventor was a brilliant but mysterious computer coder who worked under the pseudonym “Satoshi Nakomoto.” Satoshi created Bitcoin in 2009 and subsequently vanished, but he left behind a blueprint for a whole new type of money that seemed tailor-made for the internet age. Money without banks or borders. A “cryptocurrency” that no single person controls, which can be sent around the world as easily as sending an email. Where most people saw a weird experiment, Ruja saw world-changing technology. She decided that instead of trying to make money buying and selling these peculiar new coins, she would go one better and make her own cryptocurrency.

In the tech world, she sometimes told the skeptics, it’s never the person who has the idea first who gets rich—it’s the person who makes that idea work for the man and woman on the street. Jeff Bezos didn’t invent e-commerce; he simply made it accessible to everyone. MySpace came before Facebook, but it was Mark Zuckerberg who changed the world. Steve Jobs, Bill Gates, Elon Musk, even Thomas Edison took ideas that were already out there and turned them into something ordinary people could use. That was OneCoin—cryptocurrency for the masses. It might have been smaller than its better- known rival Bitcoin, but not for long. Ruja promised that it was faster, smoother and easier to use. She predicted that, one day, workers would get their wages in OneCoin. Buy their shopping in OneCoin. Anyone who invested now, before the price skyrocketed, would make a killing.

But OneCoin was about much more than getting rich. Bankers and governments had been ripping people off for decades, all because they control money: they print it; set the interest rates to lend it; speculate with it; charge extortionate fees to borrow it. The 2008–9  financial crisis had proved that. Cryptocurrencies like Bitcoin and OneCoin were the solution, thanks to a revolutionary idea hidden within the tech: fixed supply. Satoshi Nakamoto created Bitcoin because he was angry about the way governments bailed out the failing banks in 2008 by printing more money, which in the end made poor people poorer. So he’d placed a cap on the total number of bitcoin that could ever be produced at 21 million, which would be released at a pre-programmed, tamper-resistant rate. A fixed-supply currency that government couldn’t mess with.

Ruja had designed OneCoin to be bigger than Bitcoin, although it followed the same principle. Rather than 21 million coins, there would only ever be 2.1 billion OneCoin in circulation. That number—2.1 billion—was everything. It was built into the technology itself, set in stone. No one could ever print more OneCoin, not even Ruja herself. No wonder the powers-that-be were so scared of cryptocurrencies like OneCoin. They couldn’t control it.

“Now I think it’s time,” Ruja told the crowd in her unusual Bulgarian-German accent, adding carefully controlled pauses for applause, “do or do not. We want to be the number one cryptocurrency out there.”

There was barely a soul inside Wembley Arena who doubted her. Everything else Ruja had told them had come true. In the space of 18 months, two billion Euros had been invested into OneCoin, pushing the value of a single coin from zero to €5.95— exactly as she’d predicted. Hundreds of people in the Arena had already become millionaires thanks to her.

But now, she told them, we have a problem. Apparently, OneCoin had got so big so fast that she was running out of coins.

“Can we become the biggest cryptocurrency in the world with what we have now?” Ruja asked rhetorically.

“Yes!” someone shouted from row Z. It was so loud and so certain that Ruja heard it all the way up on the stage.

She slowed down to emphasize the spoonful of sugar that would obscure this dramatic—and, in theory, impossible—increase in OneCoin’s supply. “For you, as existing members, people who supported us in phase one . . . we as a company will double the coins in your account.”

The crowd went ballistic. The frenzied atmosphere was more like a religious celebration than a sales conference. Anyone who wasn’t cheering was stunned into silence. On October 1, 2016—just over three months away—everyone’s OneCoin would be doubled. And, better still, Ruja promised the value of the coin wouldn’t change. Each OneCoin will still be worth €5.95.

“We love you, Ruja,” someone shouted.

“Thank you,” she replied. “In two years, nobody will talk about Bitcoin anymore.”

With a click of her fingers, Dr. Ruja doubled the wealth of every single person in the crowd. Not to mention the hundreds of thousands of investors who hadn’t made it to London. It didn’t seem to matter that she was breaking rule 101 of economics: that when the supply of something goes up, the price goes down. Nor did it matter that she was breaking her own promise: that there would only ever be 2.1 billion OneCoin in circulation, and that “fixed supply” was the whole point of cryptocurrency. So how was it possible to increase the number of coins by a factor of 50? And without affecting the price?

But if anyone could mint millionaires overnight, it was Dr. Ruja.

“Would Konstantin Ignatov and Duncan Arthur please report to the counter?” announced a voice over the airport speaker system.

Konstantin’s flight was already over two hours delayed, which was the last thing he needed. It had been a tiring few days. For three straight days, he’d been stuck in a hotel conference room with his colleague Duncan Arthur, a heavy-set IT guy from South Africa, planning a US expansion of the e-commerce arm of the OneCoin business. At least he’d soon be sitting comfortably in business class, reading his new Stephen King novel and heading back home to Bulgaria.

He had been warned several times that going to the United States was an unnecessary risk. But his security adviser Frank, who had mysterious high-up “sources,” had assured Konstantin that he wasn’t on any Interpol arrest lists. Konstantin was a little surprised he’d made it into the United States in the first place. On arrival two weeks earlier, he told the inquisitive border officers that he’d come to train with a mixed martial arts fighter. With his muscular frame and all-over tattoos, the 33-year-old certainly looked the part. Maybe that was why they let him in.

“Is business class boarding now?” Konstantin asked the Turkish Airlines flight attendant when he reached the departure gate. He was feeling upbeat again. Boarding first was one of the perks of his job.

“Through that door please, Mr. Ignatov,” she replied calmly, gesturing toward a door.

The moment he walked through the door Konstantin knew he wouldn’t be flying anywhere. Five large men in suits were waiting for him. In a sudden blur of action, two of them twisted his arms behind his back, and a third cuffed him and bundled him through a side door. Before he could splutter out a word, Konstantin was sitting in an interrogation room that resembled the set of a 1990s TV detective series. The sort of room where scruffy detectives from the LAPD play good cop, bad cop. Duncan, meanwhile, sat in a similar room down the hall.

“Where is your sister?” they asked.

For two years, the FBI had been asking that question. They’d almost got her 18 months earlier—they practically had her. They’d even sent the Bulgarian prosecutors an indictment request. But Ruja Ignatova was too smart for the FBI. Too quick. Too well- connected. The officers knew Konstantin was just a lackey. He’d only started working for his sister the week of the big London event where she’d doubled everyone’s coins. But he was one of the few people who might know where she was.

“Where is Dr. Ruja Ignatova?”

Konstantin knew all the rumors and well-rehearsed excuses. She was on maternity leave. She was in London, living in Buckingham Palace. In Russia with Vladimir Putin. On her private yacht in the Black Sea with all the money and a new plastic face. Holed up in a private compound in Dubai. She was dead—captured and murdered by Albanian gangsters in Greece who wanted their money back. He’d even repeated some of them.

“I don’t know,” he replied. “I’ve not seen Ruja for eighteen months.”

Excerpted from The Missing Cryptoqueen: The Billion Dollar Cryptocurrency Con and the Woman Who Got Away with It, by Jamie Bartlett. Copyright © 2022. Available from Hachette Books, an imprint of Hachette Book Group, Inc.